TRIGGER WARNING This article or section, or pages it links to, contains information about EATING DISORDERS which may be triggering to those who struggle with body image, eating disorders, purging or other forms of unhealthy weight loss.

Three years ago, towards the end of my senior year of high school, I had a secret. It was a secret that I would keep to myself for years. A secret that I was forced to reveal this past week. I’m embarrassed, ashamed and scared.

Earlier, during my senior year of high school, I moved in with my at-the-time best friend’s family. It only took a few months, after the “honeymoon” phase, before some things started to go sideways. At the time that I moved in, I already knew I had Avoidant Restrictive Food Intake Disorder (ARFID). I always perceived food to have rules surrounding it, for example, there were rules about going back for seconds, how much you could take and what foods you could go back for seconds for. Each home I visited had different rules about snacks, seconds, types of food you could eat, etc. I became overwhelmed with trying to keep track of all these rules and experienced crippling anxiety surrounding the food and whether or not I’d be punished for breaking the food rules. Eventually, I became consumed by this fear, and I began avoiding eating food out of fear, and when I was eating food, I didn’t allow myself to eat too much so that I wouldn’t break any rules. I began sneaking food and keeping it hidden in my room, because in my mind, if no one saw me eat it, it didn’t count. When I moved my senior year into another household with foreign rules, it was a great source of stress for me.

There was one time the dad of the family and I were in the kitchen and getting ready for work, packing out lunches. I couldn’t’ find anything I wanted except some leftover pizza, and I asked him if I could take that to work. He said it was fine, but when my lunch

break came, I had multiple text messages from the mom, expressing feeling upset because she had been looking forward to eating pizza for lunch. When I returned home after work, she confronted me about it a second time and then proceeded to give me the silent treatment for the next 3 or 4 days. There were many similar incidences where I ate the wrong things and was yelled at, monitored closely, or given the silent treatment. Suddenly I found myself running to the bathroom, throwing up after I ate because of the sheer panic and guilt over what I had eaten. Before I knew it, everyone seemed to be commenting on my weight and just how skinny I was. I weighed a mere 100 lbs. I became consumed with my body image. I felt like I had the dream body. Although I was uncomfortable with how skinny I was and with all the comments I was getting, everyone else seemed to think it was a good this. At least I was getting attention from it. People would tease me for it, but I took it as a compliment. I began avoiding unhealthy food unless I was alone. I began obsessively working out, doing challenging ab routines and lifting weights to keep my arms looking good. I received a comment on how strong and hard my thighs were, and I immediately added leg workouts to my nightly routine. No matter how much I worked out, I wasn’t getting skinnier. I knew I had to get skinnier or everyone would hate me and tease me for getting fatter. I began secretly purging whenever I could after a meal without being caught. When I moved into my own apartment and lived by myself, I was purging after nearly every meal. I had to stay skinny. I bought clothes that were almost too small for me as motivation to lose weight. I lived right by a bike trail and a local nature preserve, and I went walking for hours in an effort to stay skinny. I became obsessed with how I looked. I often couldn’t remember the last meal I had eaten. I felt confident and sexy, but it wasn’t enough. I wanted more.

When I went to Rogers, I attended their mood disorder program, and they forced me to eat every meal, otherwise, I was going to be kicked out. I tried to purge when I could, but with 10 other patients and 3-4 staff members on the floor at any given time, it was a challenge. Sometimes I’d wait until everyone was asleep and purge then. But I was gaining weight. Twice a week I was weighed, and I completely panicked. I eventually became so overwhelmed that I stopped caring. I would still push my food around on my plate and purge when I could, but I became beside myself with shame over my body 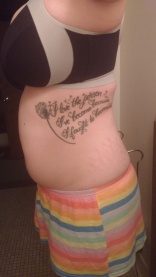 weight. Suddenly, no matter how much I ate or how much I exercised, used laxatives or purged, I was gaining weight. Even when I didn’t eat for days, I’d step on the scale and see I had gained 3 more pounds. I tried everything, but I still kept getting fatter. My clothes were too small. And by the time I went out and bought new clothes, a month later even those didn’t fit anymore. Before I knew it, I had gained 100+ lbs and I had no idea why.

A month ago I was diagnosed with Polycystic Ovarian Syndrome. One of the symptoms of PCOS is that I produce an excessive amount of male hormones. Men tend to carry weight in the abdomen area, so women with PCOS also tend to carry a lot of weight in their abdomen too. Despite all the laxatives, purging and excessive exercise, I was now over 200lbs and HATED my body. I had gone from a size 0 to a size 18… a size small to a size x-large. I was overwhelmed and became desperate, and I tried to seek help. I had never told anyone I had bulimia, I had never been diagnosed, but I’d known I’ve had it for nearly 3 years. I tried getting help for ARFID, hoping that I would pick up some skills to help with my bulimia along the way, but I was met with unwillingness and zero concern everywhere I went. My primary care doctor, my psychiatrist, the ER doctors, other mental health professionals. etc. One time the ER doctor had the audacity to say that I couldn’t have an eating disorder because I was too fat. There was an eating disorder specialist that I kept calling, but she only returned my call once, and now seems to be ignoring me. I felt like I was a lost cause and worthless, because no one seemed to want to help me.

All of this climaxed this past week. I was staying at a mental health facility because I had gone off my meds and was in great need of some respite after over 25 days of being fully manic. It was a 5 day stay, so while I was there, they offered 15 meals. I only ate 2 meals. After both of them, I purged everything I could. The second night, I was caught. The staff member stood on the other side of the bathroom door, asking me what I was doing. I knew I was caught and confessed that I was purging.

“What can I do to help?” she asked.
“I don’t know, I’ve never gotten help for an eating disorder. I can’t control when I purge.”
“Okay. Well just stop it. Make sure you flush and just go back to bed.”
I hear her footprints retreating. I finish purging and I wash my hands and face before returning to my room, consumed by tears.

The next day they diagnose me with bulimia but don’t do anything to help me, despite me asking where I can get help for my eating disorders. Later, I request information on bulimia and types of treatment. I get handed a single page that defines different eating disorders and talks about how anyone can get an eating disorder. There’s another page that just shares statistics of eating disorders.

When I’m discharged I share my experiences with one of my friends, and she tells me she’s going to ask her mom, who is a doctor, about where I can start getting the help I need. Thankfully she took me seriously and gave me a phone number to call.

That brings us to today, me writing this blog post. This had been one of the more difficult pieces I’ve written. My struggle is going from 3 years of being private to having the whole internet gaining access to it. But I think it’s a very important thing to share. If I had continued to keep this a secret, it could have killed me. 4% of people with bulimia die. I had a deadly secret. I hope that this post encourages those struggling with an eating disorder to start seeking help, just like me. You’re not alone. I see you.