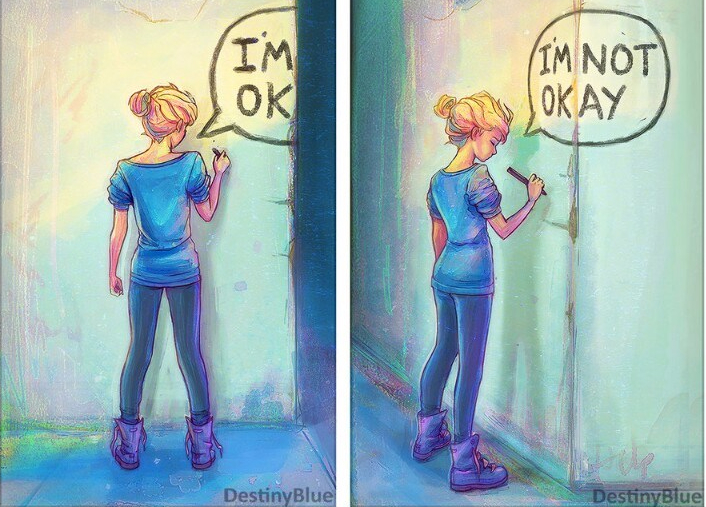 So James and I broke up this weekend, just three weeks before our one-year anniversary. If I was given a choice on the best way for me to be broken up with, this break up would have been better than anything I would have come up with. In the end, I’m more okay than I ever thought I could be right after a break-up, and I know that I will be okay. I’m heartbroken, but he didn’t break my heart.

When you have Borderline Personality Disorder, something you deal with is severe abandonment issues. Breaks-ups have the potential to be one of the hardest things to deal with when having BPD because, in our minds, we’re being abandoned by someone who is our best friend and biggest support. Someone who is the #1 person in your life suddenly is no longer around. The separation can feel like the end of the world.

Another common symptom of BPD is called splitting. If that sounds painful to you, that’s because it is. It’s a coping/ defense mechanism people with BPD subconsciously use when facing their inability to deal with opposite emotions. There’s a reason BPD is also called Emotionally Unstable Personality Disorder. We view the world as black and white. Either you love me or you don’t, it can’t be both. You always want to be around me or you never want to see me. James loves me, but we’re not dating anymore, and despite him answering all my questions about it, it still confuses the heck outta me. In my mind, it just isn’t possible for something like this to exist because my borderline tells me everything is black and white. One moment I feel I’ve forgiven him, and I feel a sense of calm about the situation, feeling okay with what happened and knowing that it’s the best choice given the situation we were in, then I suddenly feel such agony because it’s all gone and I can’t live without him because my life is going to be so different that I can’t cope. I’m torn down the middle trying to bridge the gap between two opposing thoughts because my brain can’t do it by itself. I’m on a rollercoaster that I can’t get off of no matter how hard I try.

**Trigger Warning – this next paragraph discusses self-harm and suicidal thoughts**
When people with BPD experience intense emotions, we often feel we are unable to cope with it and turn to self-destructive behaviors like self-harm and suicidal tendencies. 10% of those of us with BPD end up successfully committing suicide. Having Borderline has been compared to having 3rd-degree burns over 90% of your body, that’s how strong our emotions are. Even at 582 days cut-free, I’m facing urges to cut again as a desperate attempt to make the feelings and the splitting go away. I have thoughts telling me I’d rather kill myself than go through the process of starting a new relationship from scratch while dealing with everything else in my life. Even though I’m generally stable with my recovery in terms of self-destruction, all it takes is one little thing to make me feel like I’m back at square one.

So what helped this break-up be something I feel I can cope with, and why do I think it was a good way for me to be broken up with? What happened that makes these symptoms less destructive?

Did you like this article? Do you want to read more? If you want to read more about what BPD patients feel and do because of our fear of abandonment, The Mighty has a great article you can read here. If you have BPD, or know someone who has it, you might relate to some of the things I talked about in this article and want to know more about friendships and BPD. This article talks about 6 things your BPD friend wants you to know, and it continues to talk about some of the topics I mentioned.

Do you have any tips for me on getting through this break-up? I’d love to hear them in the comments below!