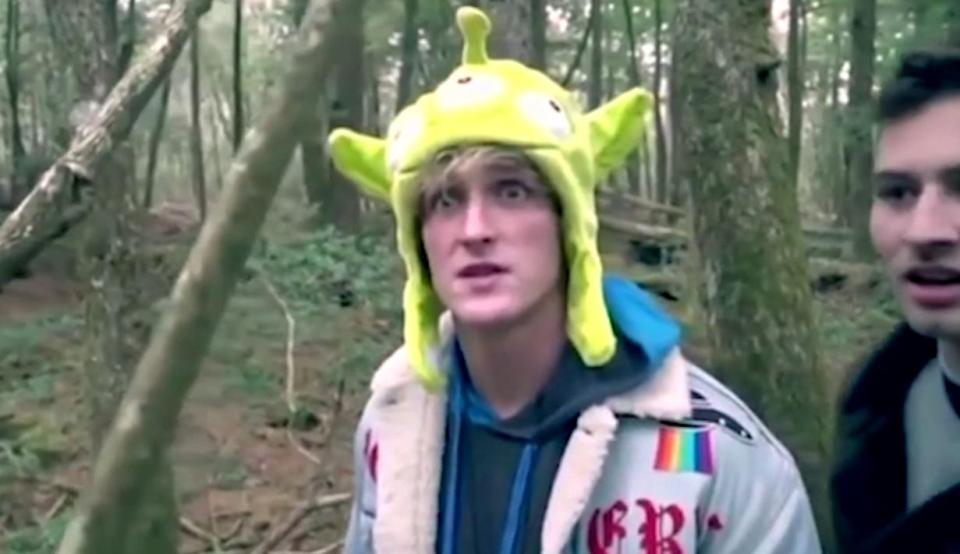 TRIGGER WARNING This article or section, or pages it links to, contains information about SUICIDE and SUICIDAL THOUGHTS/ ATTEMPTS which may be triggering to those who struggle with suicidal ideation.

You’ve probably heard of Logan Paul’s latest vlog that he posted that has generated high amounts of media coverage for his vlog where he went into Japan’s Aokigahara, or “suicide forest” and discovered a dead body. The general consensus is outrage at his insensitivity and decision to post the video. Others jump to his defense, saying that his laughter and jokes were his way of coping with an overwhelming situation. Before I posted this blog post, I wanted to make sure I gathered as much information as I could so I could form a real conclusion for myself. I watched the video and his apology, as well as read opinion articles and opinions that come from both sides of the “argument”.

Logan Paul had ~15 million subscribers on YouTube when he posted his video that was filmed on December 31, 2017. His “New Year’s Eve” goal was to post something that met a two-year-old goal of his to “slow it down and go somewhere isolated.” If that was the goal, there are a THOUSAND other places that could meet those criteria. Many of his followers are kids in their tweens, and many parents cried out in frustration when they were forced to tell their kids about suicide before they felt their kids were in a place to be able to handle that kind of conversation.

Something that immediately bothered me, before he even goes into the forest, is when he announces the name of the forest as “the suicide forces” he grabs one of his friends by the back of the neck and pulls him into the shot. As a survivor of a near-fatal suicide attempt by hanging, this made me uncomfortable. Whenever someone touches my neck since my attempt, I immediately get a sick feeling in my stomach. With suicide already on my brain due to the nature of the video, seeing someone pull on another’s neck made me want to hurl in discomfort over the flood of unwelcome memories.

Paul and his crew reveal their plan to camp in Aokigahara overnight, and when showing what they’ve packed, the item that stuck out to me was a football. I don’t know what on earth they were thinking. “We’re going camping in a forest where a hundred people kill themselves every year… let’s toss a football around the campsite!” The insensitivity was already glaringly apparent. They also mock the fact that the football says “signs” on it, and at the end of the video Paul loudly exclaims that they should have listened to the football. Paul proceeds to don a lime green alien-like hat and a “f***ing Gucci jacket” covered in colorful print and patches because he “wants to look good”. Paul then mocks his friend for saying “dead serious” by a suicide forest and then laughs with a big ole smile. You can hear him chuckling when he talks about the folklore that claims the spirits of the deceased “lure the sad and lost off the path.”

Next, they venture into the forest… “just a dumb Americans going camping…” Dumb is right. Paul makes an announcement to the ghosts in the forest, asking them to leave his group alone before the crew sets off, leaving the path. It’s not long before they discover a body hanging from a tree, and from their assessments, apparently “looks fresh.” A crew member immediately calls the police. You can immediately tell that Paul and his friends are deeply shaken by this finding, and you can see the emotion on their faces. At the very least, this is where the cameras should have turned off out of respect for the deceased and their loved ones. But no, they film the body. Yes, they blurred out the face, but it’s still disrespectful to continue filming. Turn the cameras off so you can deal with your preliminary emotions without having to “play to the camera.” Paul even admits that this was supposed to be a “fun vlog,” which is particularly upsetting because nothing respectful can come from filming a “fun vlog” in Aokigahara. Even if the video ended up being the crew camping and laughing over the “spookiness” and telling ghost stories, it would have been disrespectful because of the location. Thousands of people have lost their mother, brother, or best friend in that story. It’s not a place to mock their pain with a fun camping trip.

Paul does address the fact that mental illness is real and that you are not alone. He does slow down and gets serious. But if I was one of his followers watching the video, the laughter and the jokes would overpower the statement he makes. “Actions speak louder than words,” and when you are galavanting through a place known for attracting people with feelings similar to mine, a generic statement saying “you’re not alone” is the last thing I want to hear from you. Your actions have already screamed way too loud, Logan.

Upon leaving the forest, Paul is seen drinking and excitedly conversing with fans they ran into. Why he chose to include that in the video, I’ll never know.

He later issued an apology video, which I’m not even going to get into, but I will say this: you are not required to accept his apology. Just because he issued an apology does not mean you need to excuse what he did or especially how he made you feel. It doesn’t invalidate you or what you are going through.

Overall I’m left with a really sad, unsettled feeling. This video sickens me. Even Paul himself says that his jokes are a coping mechanism, but the jokes started way before the body was found.

If you are struggling with thoughts of suicide, please know that there are many resources available to you in your time of need. You can call the suicide hotline at 1-800-273-8255, or, if talking to a stranger feels like too much, text HELLO to 741741 to talk to a certified crisis counselor for free. Neither of these resources will immediately jump to calling the police. They are there to listen to you and provide support. And if the police where to even be involved, it’s not as bad as you think. They are also there solely to get you the help you need.